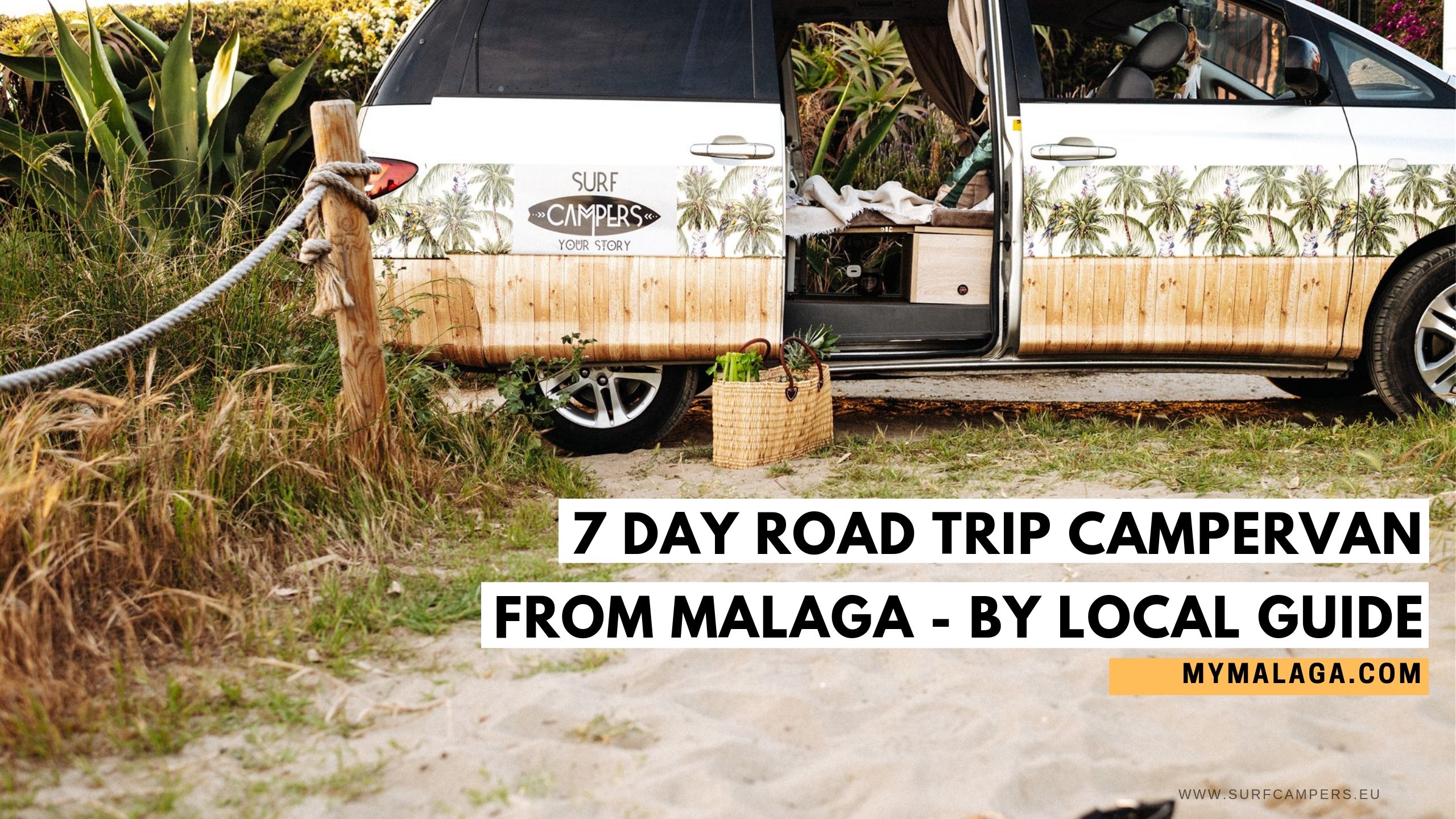 If you are adventurous as much as I do, you hide the wild nature in yourself and dream about freedom. Believe me, there is no better way to spend your holidays, as a journey – road trip by the campervan. Immediately comes to your mind the proximity of nature, mornings overlooking the beaches. Wind in your hair and charming places. To sum up, all this you can find in the province of Cádiz. This region has everything that you need – climatic white villages, mountain landscapes and the coast of light (Costa de la Luz), being the southernmost corner of continental Europe.

If we add to this description the lack of any restrictions (obviously besides of fuel:), bedroom and kitchen in the car, the opportunity to sleep surrounded by the wildness of nature and the ubiquitous chill of southern Spain. We have the perfect recipe for the journey of your life 🙂 To help you experience an amazing adventure we have prepared an example of 7 days round trip – you start drive campervan from Malaga. A guide what is worth to see during 7 days trip in Andalusia.

More information about rent a campervan from Malaga you will find here.

It’s a truly awesome city. All because of several reasons. First of all, it is the most southern city of continental Europe. It means with good visibility you will be able to see the other continent Africa, which is only 20 km away. Secondly standing in port on the left you are surrounded by the Mediterranean Sea on the right by the Atlantic Ocean … have you ever seen it before? For me its true miracle! It could be exchanged for a long time. It is certainly also unique due to the specific climate (I’m not only telling about the permanent wind). In addition, here the rest of the world does not exist – waves, sun, kite and refreshing drinks count. However, you will not find and feel it anywhere else in Andalusia and is close by campervan from Malaga.

What to see in Tarifa:

Where to eat in Tarifa:

If you are already in Tarifa, you must spend the day on one of the last virgin beaches. Most importantly, which has not been touched by civilization, high hotels or cheap tourist attractions – Playa de Bolonia. However, before you put everything into blissful laziness, it is worth visiting the substitute of Rome in Spain – Baelo Claudia, which are the best-preserved ruins of the Roman city in Andalusia. For example, showing the entire organization of the ancient city, along with its buildings.

The ruins of Baelo Claudia are the most characteristic example of Roman urban architecture on the Iberian Peninsula, and above all the best preserved in this territory. So, to this day, the remains of houses, streets, forums, basilicas, court curia, theatre baths and four temples survived – the goddess Isis, as well as Junona, Jupiter and Minerva, called the Capitoline Trinity. Today, the remains of ancient architecture can be visited for free. Above all, there are located only 25 km from Tarifa and just close to a beach of Bologna. You can park a campervan next to the beach.

Playa de Bolonia is one of the most beautiful beaches of Andalusia and the province of Cádiz, which in 2016 received the title of the best beach in Spain. Therefore, you can find here only nature and more than 4 km of golden sand, along with a phenomenal mobile dune at over 30m in height. Consequently, which is a natural monument and surrounded by a pine forest also protects the beach from the northern winds. Trust me, its worth to spend here all day to admire this amazing place. Must have stopped during a campervan trip. Is only 2h from Malaga.

Before you will go back to the beach 🙂 it is worth to go deeper into the country. Firstly get to know one of the most charming Pueblos Blancos of the province Cadiz – Vejer de la Frontera.
The town is located at 200 meters above the sea. The road among the mountain is quite narrow and winding. The Surfcampers is preparing for it but is worth to leave the campervan at the entrance to the city.

What to see in Vejer de la Frontera

How to sightsee the village in the best way? I recommend doing this by wandering! Thanks to this you will find large brick arches and towers. Still preserved in very good condition (Mayoraz tower, San Juan tower and Corredera tower), as well as four medieval city gates ( Puerta Segur Arch, Puerta de la Villa, Sancho IV and Puerta Cerrada). So, in the highest part of the old town, you will discover a Gothic-style castle built in the 14th century. In addition, it is also worth paying attention to the Divine Salvador parish church from the 14th-15th century located on the Calle Marques de Tamaron.

The beach Los Caños de Meca is one of the most popular among region people. Because of the crystal clear water and a beautiful view of Cape Trafalgar, together with the lanterns well as the climate of local chiringuitos. I guarantee that you will not move anywhere else.

Conil de la Frontera was in the past the fishing village which specializes in red tuna fishing. Consequently, today can be called a seaside resort. Sleepy only during the day, at night takes on his other face, bustling with life until late hours (read it as morning hours 🙂

What does Conil have, which distinguishes him from the other pueblos Blancos? Beautiful, long kilometres of the wide beaches of the Atlantic Ocean, which is unique shallow and peaceful.
For example, Playa de Los Beatles, one of the most popular in Conil de la Frontera. Is about 1000 meters long and 10 meters wide, being called one of the cleanest beaches in Spain. On the other hand, in the northern part of the city. You will find cliffs that hide small bays and wild beaches that allow for seclusion and tranquillity (Playa del Chorrillo, Playa del Puntalejo)

What to see in Conil de la Frontera:

Built-in the 15th century The Church of Santa Catalina, the Gothic defensive tower of La Torre de Guzmán and the arc /gate known as the Puerta de Vejer, once symbolizing the road leading to Vejer de la Frontera.

Where to eat in Conil de La Frontera:

Where to stay in Conil de La Frontera:

The oldest city in Western Europe is simply magical, and the climate resembles Havana in Cuba. Here Krzysztof Kolumba decided to start his second and fourth journey in search of America. However, it is the city of the most beautiful beaches in Europe, like Playa de la Victoria stretching almost 3 km. Even longer Playa de Cortadura, which can be found on the new side of the city.

What to see in Cadis:

New Cathedral at Plaza de la Cathedral or belonging to the largest in Spain the baroque Cathedral of St. Cross built-in 1722-1838. In the past was a reference point for sailors. Furthermore is worth to see the Church Santa Cruz, known as Catedral Vieja (Old Cathedral). When you turn behind the church you will find the ruins of the Roman Theatre from the 1st century BC, and the 16th-century Bishop’s House (Casa del Obispo). In addition check the main square Plaza San Juan de Dios with a large town hall (Ayuntamiento), fish market and the highest towers Torre Tavira. Rising 45 m above the ocean level, where is installed the Camera Oscura. An optical device composed of a screen on which is displayed the image transmitted by means of a mirror and a magnifying glass.

Where to stay in Cadis:

Being in this part of Andalusia, it would be a sin not to try her specialities – sherry and brandy, whose capital is Jerez de la Frontera. Therefore, the city has many vineyards. Often recognized as cathedral old wines, among the most famous are: Bodega Gonzales Byass by Tio Pepe, bodega by Pedro Domecq by Osborne and bodega Sandeman.

XVIII Cathedral, the 11th-century Arabic castle, the Gothic church of St. Michael and the Royal Andalusian School of Equestrian Art – Real Escuela Andaluza del Arte Ecuestre. There we will see a unique show of dancing horses.

Going deep into the province of Cádiz, you should also see the Arcos de la Frontera another pueblo Blanco located on the steep hill of La Peńa, which is famous for that the sweet pastries of the local cloisters

The viewpoint located on Plaza del Cabildo, the massive Gothic church of St. Peter the Apostle built in XIV on the edge of the ravine, the old city

We will finalize our trip with the mountain climate and the white villages: Zahara del Sierra and Setenil de las Bodegas. Therefore, Zahara is located in the heart of the Sierra de Grazalema National Park, at the foot of the Sierra del Jaral. The town rises on the top of the hill. Is surrounded by the turquoise waters of the Zahara el Gastor reservoir, which creates an extraordinary view and a truly postcard picture.

The main attraction is the remains of Moorish castle of Nasrid and the Tower of Homage (Torre del Homenaje) towering over the town. Other places worth seeing are the seventeenth-century Church of Santa Maria de las Mesa. Also the nineteenth-century chapel of San Juan de Letrán and the sixteenth-century clock tower (Torre del Reloj).

Our last proposed stop is Setenil de las Bodegas set between the walls of a steep gorge, which is a rocky canyon of the river. The houses are even melted into a gorge and stuck to a large boulder that hangs over the ceilings of the residents. A maze of narrow streets runs through the city, where the buildings are almost in contact with each other. The rocks tower out taking away much of the light. The town is also famous for the production of olive oil, honey, the best chorizo, and the local pork.

The proposed route is over 450km of road and about 7 hours by car. We guarantee 7 days full of impressions, beautiful views, Spanish history and culture, and first of all a perfect combination of active sightseeing with blissful laziness for sunbathing. In conclusion, I am convinced that you will admire this region. Similarly, as much as we do and you will fall in love with this lifestyle 🙂

Plan for a road trip campervan from Malaga was prepared by local guide MyMalaga. Check this website! You will find Chery on the top!

If you are looking for a more incredible place in Andalusia, we have something for you: here.